Engaging beyond words to take part in a round table discussion at ICCW’s Italian Film Festival Cardiff 2017 at Chapter Arts Centre. CSAD Illustration students Matt Clench and Dom Twigg were engaged to record events, and Tom Carroll-Brentnall, recently returned from an Erasmus year in Italy and Germany, drew sketches of participants. I developed a single image to offer glimpses of the discussion:

The panel was chaired by ICCW’s Luca Paci and introduced by Claire Vaughan of Chapter. Claire’s opening  ‘How healthy is your industry?’  sparked a broad discussion of distribution challenges, changes in audience viewing habits (migration to Netflix and domestic viewing ) and varying levels of state and popular support for film across Europe.

Is film a business? Of course yes, but that’s not its primary purpose – any more than a school, theatre, community resource, museum or police car is there to make money. A film may sit on a supermarket shelf but it’s not a tin of biscuits.  We’re so used to enacting  Homo Economicus for the sake of ‘a fitter Nation’ or similar campaign-bus bunkum, it can seem futile or obvious to to affirm other human values served by creative work.

In the face of gloom-inducing Brexit, Luca Paci’s invitation to share joys of film making confirmed beneath diverse motives for making films lies a shared imperative to connect with audiences, and the need to make this a live, theatrical experience. 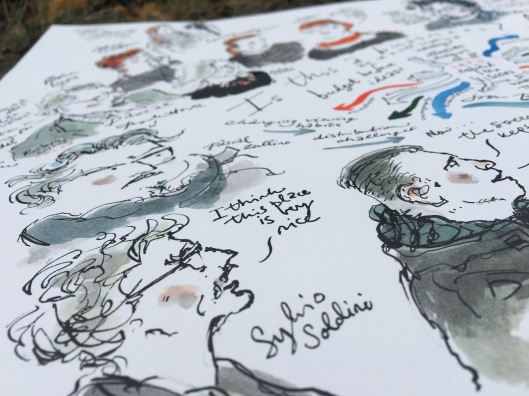 If a round table can point, this one indicated scope for greater trans-disciplinary collaboration:  between traditional players (directors, writers, actors, composers, producers) and others in the so-called ‘creative industries’ such as illustrators, designers, architects. Also supporting the festival were restaurateurs, engineers, medics, academics, students, people from many other walks of life.  The festival created a lively archipelago of conversations, centred around invitation, hosting, and sharing food and ideas. It was fantastic to see how a small group of individuals could bring such uniquely experienced voices to this ‘isola rotunda’ of film makers.

It is clear that more daring island-hopping between disciplines is possible, indicated not only by the broad thematic range of the films:  justice, rites of passage, myth of origin, language, theatre, power. It should be open season for film-makers of all backgrounds to forge new, generative connections with, for example, astronomy, medicine, law, engineering, mathematics. Given wide popular access to digital technologies, film-makers can transcend mainstream ‘cultural heritage’ and business-driven models of public engagement to create new, live film-going experiences in and beyond traditional cinema settings.  Distribution needs reimagining, constantly, on the ground, in the woods.

The round table panel included Gianfranco Cabiddu (director of brilliant Tempest-within-a-Tempest The stuff of dreams;  Sylvio Soldini (Emma);  actor-director Antonio Andrisani and actor-producer Pascal Zullino (The Gospel According to Matthew) and Enrico Lando, whose semi-surreal, comic documentary The Bear’s Tale  surprised and delighted on a budget of “1000 euros maybe less”.

Special thanks to Dr. Luca Paci and Dr. Luisa Pèrcopo for the invitation. Looking forward to another ‘tavolo profondo’ at next year’s festival.