‘what they were about, we are about’ (Photo: John Briggs) 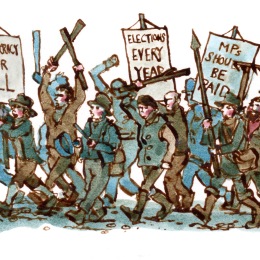 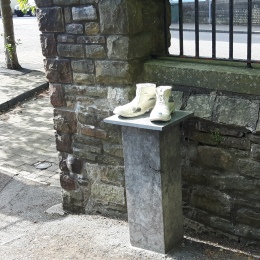 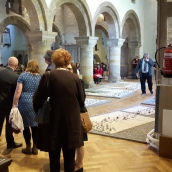 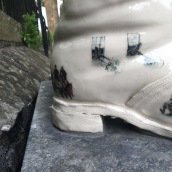 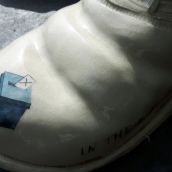 Snapshots of works created for In Their Footsteps: Loss and Contribution in Newport launched on Friday 19 May:
Chartist Boots [Ned Heywood, Parry & Glynn];
Chartist Milestone [Ned Heywood, RM Parry];
Lady Rhondda’s Shoes [Julia Land, Parry&Glynn];
what they were about, we are about – 1000 shoes march through Whitehall to the Houses of Parliament, installed in St.Woolos Cathedral [many artists] including
Tunnel Under the Venn Diagram [Parry&Glynn];
Y Ffrind/The Friend – ‘A New Newspaper for Wales and its Neighbours’, team publication led by RM Parry and Dylan Moore, spot illustrations by Chris Glynn.

A key part of the In Their Footsteps trail on Stow Hill is Open Sandals by Elin Hughes, currently studying BA Ceramics at CSAD, Cardiff Met.  This pair of East African sandals in clay is based on designs created by participants of The Sanctuary Project. People all over the world have travelled to Newport, some fleeing undemocratic regimes. Newport seeks to be known as a city of democracy . 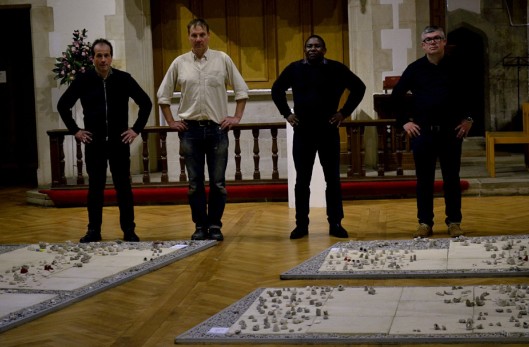 ‘In Their Footsteps: Loss and Contribution’ is funded by Newport Live, the Heritage Lottery Fund and Newport Chartist Commission.