22 small drawings have been applied to ceramic pieces by Ned Heywood and Julia Land as part of Parry & Glynn‘s work for In Their Footsteps: Loss and Contribution,  a Newport Live commission launching 18th and 19th May at St Woolos Cathedral.  A pair of workman’s boots made by Ned traces the Chartist march to the centre of Newport in 1839 in which 22 protesters were killed by the authorities.

The pieces are based on a pair of workman’s boots from the period at The National Museum of Wales collection in St Fagan’s, enlarged to size 15, the largest human shoe size on record. They have now been installed inside one of the gates to St Woolos at the top of Stow Hill.  Relaxed preview event 6-8pm Thursday 18 May at the Cathedral with a walk down the hill to view other works, formal launch Friday 19th May:  https://www.evensi.uk/in-their-footsteps-project-launch-newport-cathedral/209048154

Ceramicist Ned Heywood measuring up the plinth for the worker’s boots. 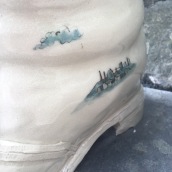 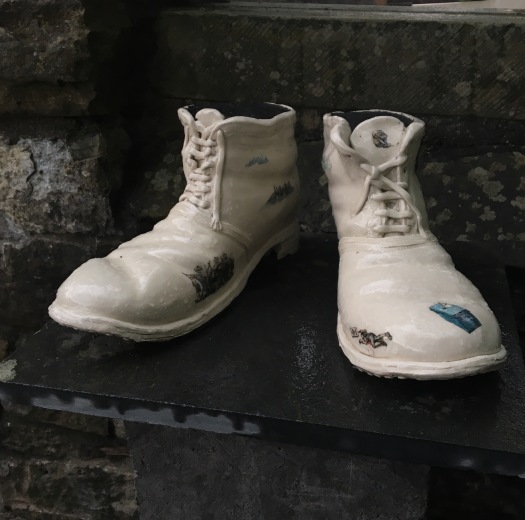 A more freehand set of ink vignettes shows the stand taken in 1913 by suffragette Margaret Mackworth, 2nd Viscountess Rhondda,  an aristocrat who went on hunger strike after enabling her own arrest and imprisonment for setting fire to a postbox in Newport – part of a wider suffragette incendiary campaign. These images have been applied to a ceramic facsimile of Lady Rhondda’s shoes made by Julia Land.

Mackworth’s shoes with enamel-fired transfers, ready to to be shown at Newport Cathedral and taken on to Westminster. The police didn’t have a car available to come and arrest her so Lady Rhondda sent her own driver. Right: in court in Usk prior to her imprisonment. Inside heel: asleep in jail.

In Their Footsteps was launched on 19 May 2017, funded by Newport Live, Heritage Lottery Fund and Newport Chartist Commission.

3 thoughts on “Drawing In Their Footsteps”