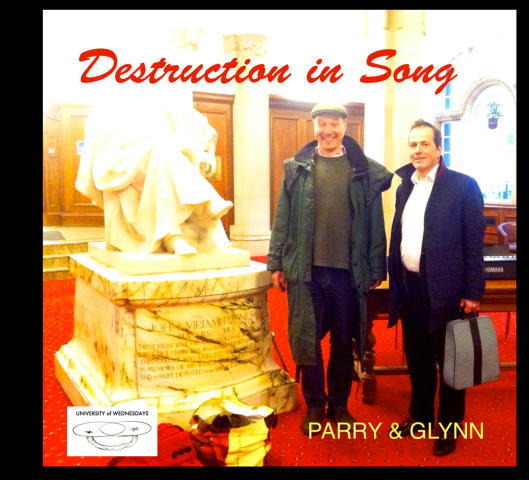 Just unpacked ‘Destruction in Song’, a performance paper with Richard Parry as part of ‘Burnt Poetry: Ivor Davies and Destruction/Creation in Art and Word’ at Cardiff University’s School of English, Communication and Philosophy.  Our theme was the challenge of engaging with the pillars of tradition, and there were plenty of these to play with in the university’s plushly carpeted Edwardian entrance hall.  The conference revisited the Destruction in Art movement of the 1960s, in the context of ‘Silent Explosion’ a major retrospective of Davies’ work at the neighbouring National Museum of Wales. Our improvised paper featured ‘Trauerzug für ein elektrisches Klavier’ (Funeral Procession for an Electric Piano), and a second performance of ‘The Invisible Song’, a mimed rendition of Schubert’s ‘An Sylvia’ in the original English. Simultaneous notes were created by conference co-curator Professor Helen Phillips, on a 1963 Olivetti Lettera 32 . With typewriters featuring prominently in musical parody (Satie, Hoffnung, Anderson), combining Schumann’s ‘Die alten, bösen Lieder’ (Dichterliebe, Op. 48) with live conference note-taking may be a new departure, assuring Schreibmaschinenstimme either a future or its own demise. There was also opportunity for delegates to rummage among our reference material and I was able to demonstrate the legs I used academically in a recent visit to America.  Illustrated notes on the event will follow in the digital archive below.