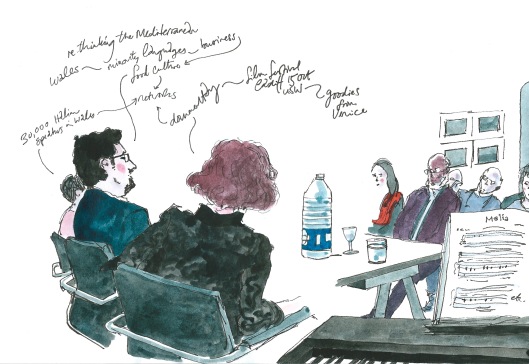 Delighted to be part of the launch of the Italian Cultural Centre Wales at Butetown Arts & History Centre in Cardiff on Friday 22 May 2015, accompanying baritone Richard Parry in Italian and Welsh songs.

The event was well-attended by academics, artists and representatives from arts organisations and businesses in Wales. Directors Dr Luisa Pèrcopo and Dr Luca Paci outlined their vision for the Centre as a lively connecting hub and resource centre for Italians in Wales and everyone interested in Italian culture. The evening included readings by poet Cristina Viti from her new translation of Dino Campana’s work, and ‘Hiraeth’, a documentary about Italians living in Wales directed by Paolo Viel.

ICCW’s aim is to foster connections between Italy, Wales and the rest of Europe and to reinforce those born from the well-established Italian-Welsh communities who have played an important role in shaping present day Wales.

The centre will host regular cultural events such as book launches, poetry reading, a film and a book club, food tastings and concerts. The next event will be held at Butetown History and Arts Centre on Tuesday 2nd June (Republic Day in Italy). The event called #GranaJazz will feature a live performance by Gyazzoband (an Italian Jazz band based in Caerphilly).

The event also officially launched the first Italian Film Festival in Cardiff, which will take place in October 2015. There are also plans to run an educational programme for children and adults learning and maintaining Italian as a second or first language in partnership with The Italian Job.

3 thoughts on “The Italian Job”