On an evening out, a small influential group of women discussed the fact there are no statues of real Welsh women in Cardiff, only allegorical figures, typically celebrating trade and industry, the arts and education, military events and nationhood. They started a campaign…

A sea nymph accompanies Roman god Neptune in a 1912 sculptural confection symbolising Navigation at the front of Cardiff University’s Glamorgan Building. Like many cities, Cardiff is traffic-coned with statues of male military figures, town worthies, sporting greats, politicians. Horses, ships and sea creatures are often involved in the choreography.  And no end of pedestals.

On Thursday 13/2/20, legal specialists Capital Law hosted an evening to raise funds and celebrate progress on a statue of Betty Campbell (1934-2017), Wales’ first black headteacher and champion of multiculturalism.  Sculptor Eve Shepherd won the bid to create the piece, which will stand in the public space between Cardiff Central Station and BBC Wales’ new HQ. 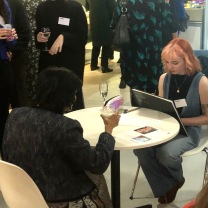 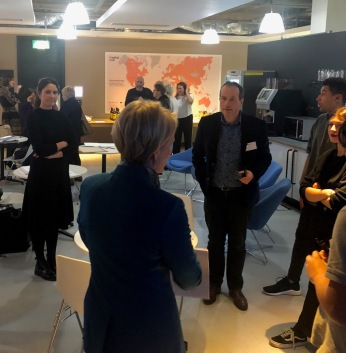 Each artist had their own ‘cabaret’ table and a live monitor profiled their work and aspirations. Guests were more than happy to sit and chat or just relax as they had their portraits drawn. The campaign’s Twitter pics of the results are here 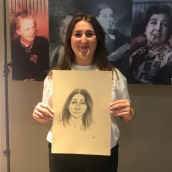 The evening was introduced by campaign co-founder Helen Molyneux and addressed by Deputy Minister and Chief Whip Jane Hutt AM. The BBC’s Felicity Evans interviewed sculptor Eve Shepherd who gave a fascinating preview of the initial designs and maquettes for the Betty Campbell statue, strictly under wraps till the launch.

Helen Molyneux listening Photo: CG
It was great to meet members of Betty Campbell’s family at the event. I remember meeting her at Mount Stuart Primary School during ‘How Tiger Bay Got its Name’ a narrative illustration project with Michael Harvey. Betty was very welcoming and supportive and radiated inspiring leadership at the heart of the community.

Betty Campbell by Lolita Skura (from a photograph)

After the event, organiser Helen Molyneux said:  “It worked even better than I had hoped and everyone loved it. The students were amazing. So talented and generous with their time… I hope we can collaborate again.”

Discussion points:
“You can’t see what you can’t be.”  Is this true? What of imagination? Pioneers?
In Wales, whose achievements would you wish to commemorate publicly?
Should Cardiff’s patriarchal statues be removed/replaced/re-positioned/re-contextualised?  Is the heroic mode appropriate in the 21st Century? [4 marks]
Normalising success, acknowledging human frailty: worth pursuing in public sculpture?
Am I the right person to be asking these questions? [0 points]

Sifting through my archive to bring together a new exhibition of schematic drawings and illuminated notes, I’ve reconnected with a …

Dotting i’s and crossing C#s for ‘Five Finger Exercise’, an illustrated musical excursion celebrating the piano as engine of creative learning and …

Been one of those weeks? Our new Disappointment Form D37 launches on Monday 19th February. Available in duplicate A4 pads …

Link to ‘Parish News Vol. 1 Part 1‘, an illustrated digest for the wider community and an exercise in collage and …